All Root Canal Teeth Are Infected 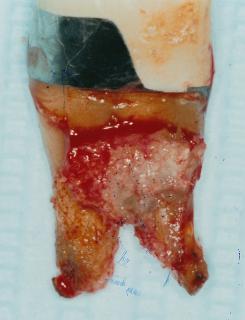 The majority of dentists, as well as the official position of the American Dental Association, believe that:

All three statements are false. The following excerpt is from the peer reviewed article found below. (1)

Thus, it may be impossible by current techniques to identify residual post-treatment root canal infection. In histologic observations of root apices, bacteria have been found in inaccessible inter-canal isthmuses and accessory canals often in the form of biofilms. There is no in vivo evidence to support the assumption that these bacteria can be entombed effectively in the canal system by the root filling and thus be rendered harmless. As a consequence of this residual root infection, post-treatment apical periodontitis, which may be radiographically undetectable, may persist or develop as a defence mechanism to prevent the systemic spread of bacteria and/or their byproducts to other sites of the body.

Therefore if the stated goal of a root canal procedure is the elimination of bacteria within the tooth, or the complete sealing in of bacteria and bacterial toxins, then by definition all root canal treated teeth are failures.

Whether these teeth cause or contribute to systemic diseases depends upon a host of factors such as bacteria pathogenicity and immune system status. However the American Dental Association position that all root canal-treated teeth treated teeth are “safe” and cannot leak bacteria or toxins systemically is incorrect.

The elimination of pain after a root canal procedure does not mean elimination of infection. The acute phase of the infection after completion of a root canal now becomes chronic, and the removal of the nerve within the tooth eliminates the pain. The infection still remains in the dentinal tubules, lateral canals and any necrotic debris not removed from the main root canal space.

Further, over time the migration of additional bacteria into the dentinal tubules from the surrounding periodontal tissues further increases the bacterial load inside the tooth.

1: Consequences of and strategies to deal with residual post-treatment root canal infection